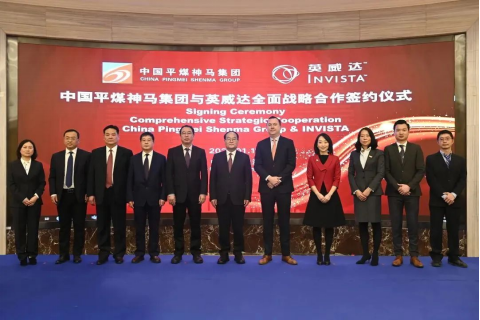 On 1st Jan 2022, the signing ceremony between CHINA PINGMEI SHENMA Group and INVISTA company has been held in Shanghai International Conference Center. The total amount for this trading contract has reached over 13 billion RMB, of which includes the products of of ADN (adiponitrile) as well as Oxalic Acid etc.

This will have driven the high-quality development of the NYLON Industry in CHINA. In the meanwhile, both sides have agreed on the “Carbon emission reduction technology licensing agreement” which means CHINA PINGMEI SHENMA GROUP steps toward the principle of achieving peak carbon emissions and carbon neutrality that the CHINA government assigned for. 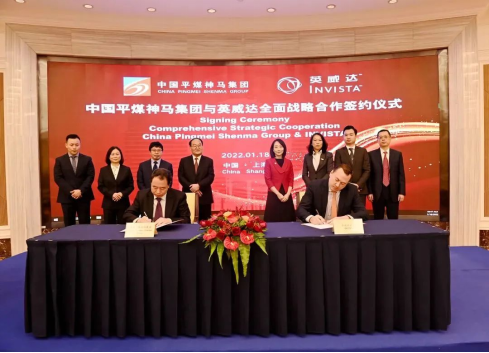 It is reported that CHINA PINGMEI SHENMA GROUP has reached a consensus with INVISTA on cooperation intention back in 2021 at the 4th CIIE (China International Import Expo). The signing ceremony this time has witnessed the final success was a joint effort with both sides.

INVISTA is the leading manufacturer of chemical intermediate, polymer and fibre worldwide. It has the advanced processing techniques and technology in its industry, and its well-known brand spreads all over the world in many countries.

It is worth saying that once the project of ADN with 400 thousand tons has been launched in SHANGHAI in the mid this year, the plant of INVISTA in SHANGHAI will not only become the top production site of PA66 in the world but the key supplier of raw material for PA66 industry in CHINA, which will bring the unprecedented opportunity for the development of Nylon 66 industry in CHINA and even in the global.

CHINA PINGMEI SHENMA GROUP has spent over 60 years developing into a large cross-regional and muti-industries enterprise focusing on coal tar, Nylon chemical, new energy and new material as its core sectors, it has established stable cooperation with over 40 of the world’s top 500 companies.

Its subsidiary, SHENMA Share(12.670, 0.07, 0.56%.SH) as the pioneer in the industry of Nylon 66 in CHINA cultivated and developed in the market for more than 40 years that build up an unparalleled industrial chain based on Coal-based nylon chemical products and has it constructed as PA6 and PA66 developing mode which serves for each other.

Dubo, the general manager of CHINA PINGMEI SHENMA GROUP says that it has established a deep friendship with INVISTA for over 25 years since the first cooperation started in 1998, the current order volume of ADN has increased to 120 thousand tons from only a few thousand tons at the beginning. He hopes this new contract will be the start of a new journey and focus on the supply of raw material, techniques sharing so that strengthen the cooperation based on the current achievement between both sides.

Likai addressed that INVISTA as the world’s leading supplier of PA66 devotes to the development of CHINA through cooperation with the partners like CHINA PINGMEI SHENMA GROUP who is getting ahead in the industry, then work together to pursue innovative-driven technology and research so as to support the industry development of PA66 in CHINA. He also says that CHINA PINGMEI SHENMA GROUP is one of the important strategic partners for INVISTA, we are looking forward to the emissions control technology that can be used in the production of Oxalic Acid in its plant, and brings reduction of carbon emission effectively.

CHINA PINGMEI SHENMA GROUP has partnered with ALF since 2017 as a shareholder, and it is our honour to work with the leading company in the PA66 industry in CHINA and devote ourselves to the development of the PA66 industry in CHINA. Over the past years, ALF has become one of the important customers of CHINA PINGMEI SHENMA GROUP that consumes a large volume of PA66 and the consumption keeps increasing yearly.

It is a trenmendous success for CHINA PINGMEI SHENMA GROUP and INVISTA to reach a new contract and start a new journey, we are very excited to witness this historic moment, this would not only be the success for these two reputed companies but also the success for the PA66 industry in CHINA, especially a fantastic news for ALF. We will take this opportunity to keep using the advantage of the partnership with PINGMEI SHENMA GROUP as well as the good vantage of our location where next to the PA66 production plant of PINGMEI SHENMA in HENAN province so that to keep our supply chain more stable and keep providing our customers with high-quality of products as always.

Request for information regarding the following products: Please insert your contact data: